This year, Ka`imi Hanano`eau recieved a Nā Hōkū final ballot nomination for his EP “Ukulele What?” in the EP of the year category.

Ka`imi’s outfit this year showcased light tones of brown with a touch of red. He wore brown shoes with red tips, made by Robert Wayne. His dress shirt is custom-made, and the designs are hand-stitched by Puamana Crabble of Puamana Crabble Designs. Check Ka`imi out in Star Advertiser’s Nadine Kam’s coverage of the first annual Poi Planet Style Awards (see below).

Next week, Ka`imi will be in Canon City, Colorado performing at the Royal Gorge White Water festival on June 24th and 25th, being the only act to perform on both days of the event. He will also be releasing a new EP that will consist of his signature alternative-rock style along with rock-reggae tracks.

“Ukulele What?” received a 2016 Nā Hōkū Hanohano Award nomination for EP (extended play) of the Year. Ka`imi’s album showcases the ukulele in a brand new light. It entices alternative, rock, Jazz, and Hawaiian music all in one EP, with the ukulele as the front-man. Titles include “D What,” which is played with a D6 KoAloha ukulele, alternative track “G Dorian Rock,” surf-inspired “Kona.” and a cover of Santana’s “Europa.” 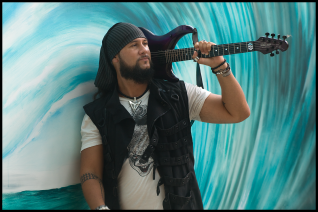 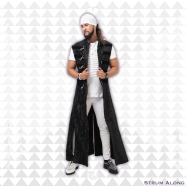 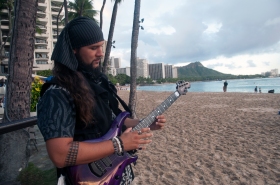